By Linda OsbornSeptember 3, 2019Behind the scenes, Henry VIII, The Music Detective, The Tudors 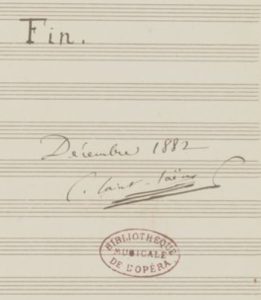 Final page of Henry VIII signed by the composer.

So to continue the story, it was March 20,and I was on a mission after suspecting there was music missing from the orchestra parts for Henry VIII.I reached out to musicologist Hugh Macdonald after stumbling upon excerpts from his book on the operas of Saint-Saëns. In it, he wrote about a large amount of material that had been cut from Acts II and III around the time of the first performance.

I told him a little about Odyssey Opera, and that we were keen to find as much of this material as we could for our performance in September, because we wanted to present Henry VIII as Saint-Saëns had intended. And in my eagerness, I fear I wrote in long, run-on sentences. But regardless, he responded right away.

LO: What was your reaction to my initial email?

HM: Coming so soon after the publication of my book on Saint-Saëns’s operas, I was excited that one of them – and one of the best – was going to be given in Boston. Henry VIII has been rarely performed either in concert or on stage since the composer’s death, although for many years after its first performance in 1883 it was played all over Europe.

LO: Did you know anything about Odyssey Opera?

HM: I did not know about Odyssey Opera before, although I was familiar with a similar enterprise, the Opera Orchestra of New York, conducted by Eve Queler, which similarly specializes in concert performances of rarely heard operas.

Two days after our initial correspondence, he sent me the music for a septet he had already transcribed from the autograph manuscript – the original ending of Act II. WOW! This wasn’t even on my radar, but how could Act II, an impassioned and chilling series of dialogues between Henry, Catherine of Aragon, and Anne Boleyn (who is already imagining her fair head graced by Queen’s regalia) end without an ensemble? This was clearly cut BEFORE the score I was referencing, and it started dawning on me that the idea of resurrecting all the missing music was likely even more monumental than I imagined.

After continuing our correspondence for a couple of weeksI started to think he might just be game to help us with this incredibly exciting project, so over Facetime, I took a deep breath and asked. I realized this would be a Herculean task, but also recognized if we could pull it off, it would be, in essence, the world premiere of Henry VIII.

He accepted without hesitation and four days later, he sent me a missing movement from the Ballet.

LO: What is it like – working from the original manuscript in the composer’s hand?

HM: My first big musicological task was editing Berlioz’s Les Troyens, followed by his other operas, so I have spent my life working in French archives on French music. Happily Saint-Saëns’s manuscript of Henry VIII is accessible in the library of the Paris Opéra and also accessible on line. 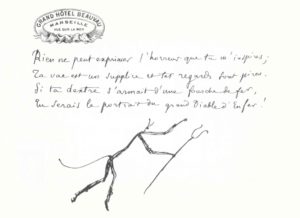 A little poem by Saint-Saënswith a sketch of the devil.

LO: Was it hard to read his handwriting?

HM: His handwriting can be very hard to read when he was writing letters, but his musical handwriting is marvelously clear. When composers make revisions and erasures, it can sometimes be difficult to decypher different layers of work.

LO: Were there any fun notes or drawings in the margins?

HM: Not in the musical scores, no, although Saint-Saëns often drew sketches and caricatures down the side or on the back of his letters to friends.

Tune in next week for the more about my journey with Camille Saint-Saëns, Henry VIII, and Hugh Macdonald.

Single Tickets for Henry VIII Are Now On Sale!

Watch the video below to hear a sample of what we are doing this year!