By Linda OsbornNovember 19, 2015The Fisherman and His Wife, The Music Detective 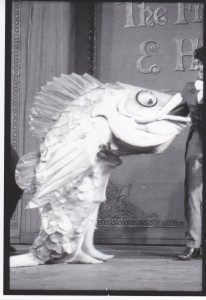 And now – what I wished with my wish.  Someone involved in the original production read this blog and surfaced just like the Magic Fish!  Robert Willoughby Jones, who was part of Caldwell’s team when this opera was produced in 1970.  He has provided some information regarding the mysterious tape.  He says:

“About the improvisational section referred to in the score. We all saw the wording and of course wondered what Schuller had in mind. In one of the piano-accompanied staging rehearsals at the Savoy, as we got to that section, the rehearsal pianist was baffled as to what to play. Ever the comic, Donald Gramm jumped into the fray by playing some unbelievably campy music that mimicked the style and mood of an especially lurid gay bar. That brought some much-needed levity to an otherwise grim rehearsal. When we reached this spot at the performance, the players were directed to improvise for a period of time (which of course they had known in advance), and that’s what they did. To me it just sounded like the rest of the score! As to the electronic component which you refer to, I’m sorry to say that I have no memory of it at all. I suppose it would have been played during the improvisatory section for the orchestra, but that’s a guess.”

So there it is.