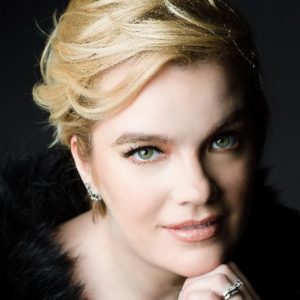 The Top Prize Winner of the 2018 Gerda Lissner Foundation International Vocal Competition in the Wagnerian Division, Amy Shoremount-Obra was recently hailed as “Incredible! Another vocal highlight of the evening. She performed with a tone steeped in longevity, endurance, and agility… This is a voice of true substance.” (Boston Music Intelligencer)

She made her Metropolitan Opera début as First Lady in Julie Taymor’s acclaimed production of Die Zauberflöte. Since, she returned for productions of Lady Macbeth of the Mtsensk District, Norma, Nabucco, and Don Giovanni. Recently, she returned to The Metropolitan Opera once again for performances of the First Lady in Die Zauberflöte, premiered Permadeath, a new opera by Dan Visconti and Cerise Jacobs, and performed as a soloist with the Philharmonic Orchestra of the State of Chihuahua. She also performed as a soloist in Kodaly’s Te Deum with Oregon Music Festival and Beethoven’s Symphony No. 9 with New Choral Society. Upcoming, she will make her role debut as Turandot in Turandot with Opera Grand Rapids.

In concert, she recently performed the soprano solo in Beethoven’s Symphony No. 9 and Vaugh Williams’s Serenade to Music with National Chorale, and did a concert and recital tour throughout the Hawaiian Islands with violinist Eric Silberger as part of the inaugural season of the Hawaii International Music Festival, which Ms. Shoremount-Obra herself co-founded. She also performed two roles in Opera America’s New Opera Showcase, a solo performance in Rossini’s Petite messe solennelle with the New Choral Society, a performance for the Sherrill Milnes Gala at The Harmonie Club in New York City, a recital for the Wagner Society of New York, and a fundraiser concert for the Hawaii International Music Festival at The Old Church.