Meet our next Helen! 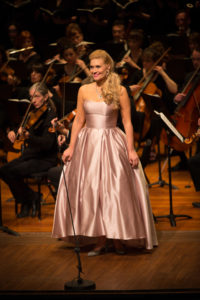 We are pleased to welcome back Metropolitan Opera soprano Kirsten Chambers to Odyssey Opera. Ms. Chambers, who is no stranger to Strauss’ music (making her Met debut on short notice in 2016 in the title role of Salome). In this interview, she shares her excitement for her return to Boston, her preparations for the title of role of Helena, and how her father called her “Helen of Troy” when she was younger!

Welcome back to Boston! How does it feel to sing with Odyssey Opera again?

It feels absolutely thrilling to sing with Odyssey Opera again!! Last time I was here I sang the role of the Infanta in Zemlinksy’s Der Zwerg. One of my fondest memories ever is hearing that lush orchestration live for the first time.

Is there anything in the city you are excited to do again?

I’m looking forward to taking long walks again in Boston Common. This time I plan to take a ride on the Swan Boats. I made my international debut in Lohengrin and ever since have a special place in my heart for swans.

What is different from the previous shows you have done with us?

Helena is a more heroic sing than the Infanta. She is also a more complex and human character. Although, she has a bit of the Infanta in her during Act 1 with the way she tries to manipulate Menelas and pretend that everything is okay as their relationship is falling apart.

What sort of work did you do to prepare for this role? When performing a role that is so rarely done, do you prepare for it any differently?

This role is a very difficult vocally, so I prepared for it differently by scheduling more voice lessons with my teacher. I always anticipate when learning a new role, whether I should plan on more musical, vocal, or acting coaching. This one is definitely a HUGE sing, so I focused more on vocal production.

How do you relate to your character?

Well, my nickname growing up was Helen of Troy. Every morning coming downstairs my Dad would say…. “Here she is, Helen of Troy, the face that launched a thousand ships!” He meant it as a joke, because I am not a morning person and look quite different upon waking…

What aspect(s) of your character can you relate to?

Helena finds her power in her sensuality and tries to regain her husband using those powers. But, it is her raw honesty and appealing to her husband’s feelings that heals their relationship. I found the husband/wife dialogue very amusing, as I was preparing this role with my actual husband who is my musical coach. During some challenging coaching moments, we spoke to each other in the same way that Helena and Menelas do – no involvement of elves or an omniscient seashell, though! 🙂

Why should people come see this opera?

People should come to this opera as it’s some of the most beautiful music ever written and it’s rarely performed! It will be a once in a lifetime and unforgettable orchestral and vocal experience!!