By Odyssey OperaNovember 17, 2016Interviews, The Picture of Dorian Gray 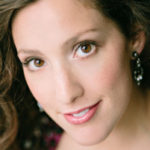 “Sopranos most often get to play the love interest and/or go crazy in opera, so it makes perfect sense that Liebermann chose a soprano to sing the role of Sibyl.  He writes a beautifully lyrical and lush love duet for Sibyl and Dorian and then, after their affair quickly dissolves, he gives her a short ‘mad scene’ of sorts where she decides to take her own life if she cannot be with Dorian. She takes on the character of Juliet for one final time as her life will ultimately imitate her art in the most tragic scenario. Sibyl’s vocal line soars in the stratosphere as she falls in love and later loses her mind.  I do not have the right voice for a role like Donizetti’s Lucia di Lammermoor where the title character goes mad, so I am delighted that I get to have my chance playing Sibyl in this opera.”