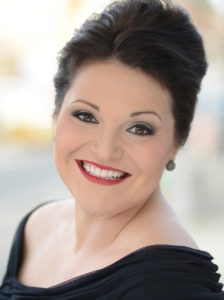 After winning several vocal competitions, including the Giulio Gari Competition, the Licia Albanese Puccini Competition, and the Opera Index Competition, soprano Tamara Mancini joined the San Francisco Opera’s prestigious Adler Fellowship program. She made her debut with the company as Freia in Das Rheingold during the 2008-2009 season. In 2010 and 2011 she appeared as Helmwige in Die Walküre.

While in San Francisco, she also appeared with the San Francisco Opera Orchestra at the Stern Grove Music Festival opposite Marco Berti in excerpts from Tosca and La Wally, and covered roles including Marietta in Die tote Stadt, Elettra in Idomeneo, Giorgetta in Il Tabarro, Desdemona in Otello, and the title role in Suor Angelica. In 2012, she performed the title role in Puccini’s Turandot at the Teatro Comunale opposite Yonghoon Lee. She then made her debut at the Royal Opera, Stockholm as Turandot, at the Palacio de Bellas Artes in the same role, and in the title role of Tosca with the Vancouver Opera. She then joined the roster of the Seattle Opera in Das Rheingold and Gotterdammerung, and was heard in the role of Ortlinde in Die Walküre. She has sung under eminent maestri including Donald Runnicles, Patrick Summers, Giuseppe Finzi, Nicola Luisotti, Michael Tilson Thomas, and John DeMain. Other roles in her developing repertoire include Amelia in Un Ballo in Maschera, Leonora in La Forza del Destino, Maddalena di Coigny in Andrea Chenier, and Santuzza in Cavalleria Rusticana.