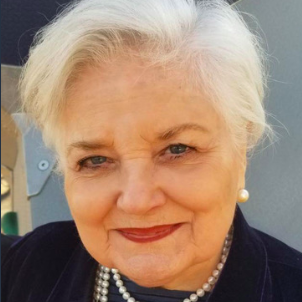 Sharon Daniels enjoyed a 25-year singing career, debuting at San Francisco Opera and singing many principal soprano roles at the Sills-Rudel New York City Opera and other American companies. While performing most standard lyric coloratura soprano roles, she was known as singing actress and for performing American works, including a PBS Great Performances and Broadway run of The Most Happy Fella opposite Georgio Tozzi. She performed at Kennedy Center in a run of Carlisle Floyd’s Of Mice and Men as Curley’s Wife, and in several productions of his Susannah, once with Sam Ramey as Blitch, and twice with the composer as stage director. Other favorite roles were Birdie in Regina, Baby Doe in The Ballad of Baby Doe, and Pat Nixon in Nixon in China.

She served as stage director for The Ballad of Baby Doe at Boston Lyric Opera and Lyric Opera of Kansas City, The Medium at PortOpera, Le Nozze di Figaro at Granite State Opera, Heggie’s Three Decembers for IVAI, Virginia, and Susannah for IVAI Tel Aviv. She recently produced and directed Three Decembers at Boston Playwrights Theater.

She served National Endowment for the Arts as on-site evaluator, and as funding and composer review panelists for Opera-Music Theater/New American Works.  A sought-after master teacher and adjudicator, her voice students sing regularly in professional venues and have won major competitions. She enjoys following the careers of previous voice students and alumni of the Opera Institute as they perform in international venues.