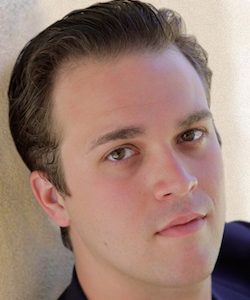 Samuel Levine has emerged as an elegant and robust tenor on the cusp of a major career. His 2014 performance with Gotham Chamber Opera, in the dual roles of Testo in Monteverdi’s Il Combattimento di Tancredi e Clorinda and Noah in the world premiere of Lembit Beecher’s I Have No Stories to Tell You, was called “eloquent, full-bodied,” “bright-voiced and skillful” (Wall Street Journal) and “well-sung” (New York Times). Recent highlights include Narraboth in Salome with Virginia Opera, Neighbor/Ravan in the world premiere of River of Light with Houston Grand Opera, the title role of Der Protagonist with Fire Island Opera Festival, Traveler in the world premiere of Clemency with Boston Lyric Opera, and Léon in The Ghosts of Versailles with Opera Theatre of Saint Louis and Wexford Festival Opera. In concert, he has appeared at Chicago Symphony Center, Weill Hall at Carnegie Hall, l’Orchestra Sinfonico di Milano Giuseppe Verdi, and with New York Festival of Song. Upcoming engagements include a role debut as Don José in Carmen at the Savannah VOICE Festival (presented by Sherrill Milnes), Lurcanio in Ariodante in R.B. Schlather’s internationally-acclaimed series of Handel’s Ariosto operas at the Whitebox Art Center in New York City, and a debut with Opera Philadelphia. Mr. Levine is a graduate of the Oberlin
Conservatory, the Yale University School of Music, and the training programs of the Santa Fe Opera and the Tanglewood Music Festival.