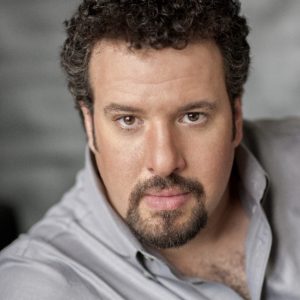 Brooklyn-born bass Oren Gradus is rising in recognition and critical acclaim throughout North America and Europe as a brilliant basso cantante. His 2012-2013 season included several career milestones: he made his house debut with Washington National Opera as Henry VIII in Anna Bolena, his house and role debuts with Gran Teatre del Liceu in Barcelona as the four villains in Les Contes d’Hoffman, his house debut with Canadian Opera Company as Raimondo in Lucia di Lammermoor, and his house and role debuts with Opéra d’Avenches in Switzerland as Zaccaria in Nabucco. Mr. Gradus returned to the Metropolitan Opera as Publio in La Clemenza di Tito, which was broadcast as part of The Met: Live in HD series. He also had the privilege of performing in concert with the legendary Roger Waters in his original opera Ça Ira in Gothenberg, Sweden. In the 2013-2014 season, Mr. Gradus reprises his powerful portrayal of Colline in the Met’s production of La Bohème, which will be broadcast in theaters worldwide. He also returns to Pittsburgh Opera for performances of Ramfis in Aida and Sarastro in Die Zauberflöte, and makes his house debut with Baltimore Opera as Zaccaria in Nabucco.

Oren Gradus studied music at the Oberlin Conservatory and subsequently became a member of the Pittsburgh Opera Center and the Houston Grand Opera. Mr. Gradus made his Metropolitan Opera debut during the 2002-2003 season, and has since performed various roles there such as Masetto in Don Giovanni, Timur in Turandot, the Old Hebrew in Samson et Dalila, the King in Aida, and Garibaldo in Rodelinda, opposite Renée Fleming.