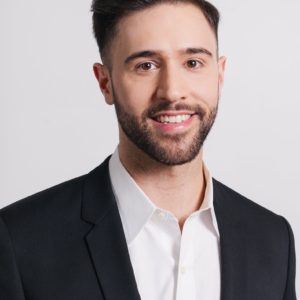 Jacob Scharfman brings a bright new voice to his home city. The Boston Musical Intelligencer recently praised his baritone as “certain to gain popularity[…]well-rounded and rich, maintaining clarity and precision throughout his entire range.” Operatic engagements this season include Mr. Webb in Rorem’s Our Town with Boston Opera Collaborative, Prince Yeletsky in Tchaikovsky’s Queen of Spades with Harvard’s Lowell House, and the Pilot (cover) in Rachel Portman’s Little Prince with Opera Fayetteville (AR). A favorite soloist of the Henry Purcell Society of Boston, he will debut at the Boston Early Music Festival this June. Last summer, he sang recitals in Tailloires, France and Bologna, Italy, and premiered the role of Aro in Operahub’s Der Vampyr, hailed by the Boston Globe as “stellar[…]one of the most rewarding theatrical events of the season.” Jacob graduated magna cum laude from Brown University in 2013, where he played Aeneas in Purcell’s Dido and Aeneas, delivered a recital of Elizabethan poetry in song, and riveted Commencement audiences with his “Star-Spangled Banner.” He also directed the university’s Madrigal Singers and completed a second major in Italian Studies. His translation of The Blood of Honor, a historiography of dueling by Marco Cavina, is set to be published by Cambridge University Press. On staff at Trinity Church and Central Reform Temple, he has appeared as a soloist with the Boston Camerata, Providence Singers, Schola Cantorum of Boston, and Community Music Works.