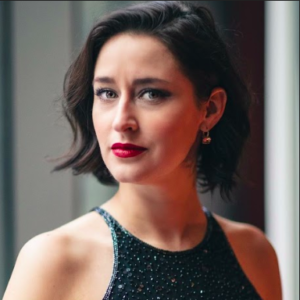 Mezzo-soprano Hilary Ginther enjoys a career that embraces three centuries’ worth of operatic repertoire from contemporary to baroque. Opera Now Magazine profiled her in May 2016 as one of ten young American singers intent on taking the opera world by storm (“Written in the Stars”), calling attention to her “substantial and richly colored instrument”. Ms. Ginther’s Philadelphia Orchestra debut as a featured soloist in the orchestra’s first-ever performances of Bernstein’s MASS under the baton of Yannick Nézet-Séguin has been recorded by Deutsche Grammophon and was internationally released in March 2018, in commemoration of the composer’s centenary.

In the spring of 2019, Ms. Ginther returns to Fargo-Moorhead Opera to reprise the title role of Bizet’s Carmen, which she had debuted earlier in her career, and makes her Fort Worth Opera debut as Judy Sinclair in the world premiere of Rachel Peters’ Companionship. Future engagements include two major Tchaikovskian role and company debuts: Joan of Arc in The Maid of Orléans with New Orleans Opera (2020) and Olga in Eugene Onegin with Opera Omaha (2021). Next fall she will also debut the role of Anne Boleyn in Saint-Saens’s Henry VIII in Boston.

Throughout the 2017–2018 season, Ms. Ginther made a series of auspicious debuts on both coasts. She joined MidAmerica Productions on a program of Haydn and Forrest for her Carnegie Hall debut, followed by her New York City Opera debut as Lureen in the US premiere of Charles Wuorinen’s Brokeback Mountain, and concluding with her Los Angeles Opera debut performing a double bill of Gordon Getty’s operas Usher House and The Canterville Ghost.

Ms. Ginther’s New York appearances have also included performances with the Center for Contemporary Opera in a double bill of Louis Andriessen’s Odysseus’ Women and Anaïs Nin, the 2017 local premiere of Carlisle Floyd’s Prince of Players, in which she created the buffa role of Lady Meresvale, and Sesto in La clemenza di Tito, a role in which Ms. Ginther “made a tremendous impression… a big voice and an actor who could meet the role’s demands, doing so with style and dramatic meaning.”