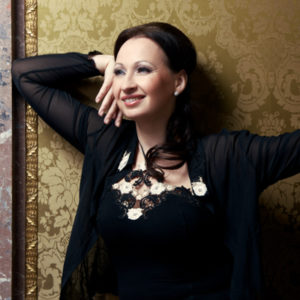 Dana Buresova studied at the Prague Conservatory. She was the pupil of professor Brigita Sulcova. During her studies she took part in several musical courses of professor Pavel Lisician in Weimar.

In her fifth grade of the conservatory she became a soloist at the theatre in Ceske Budejovice, where Zerlina in Don Giovanni by Mozart was her first role. At the same theatre she sang Adele in Die Fledermaus by Strauss, Esmeralda in The Bartered Bride by Smetana and and The Kitchen Boy in Rusalka by Dvorak.

After winning the competition for the part of Marenka in The Bartered Bride for the National Theatre performance in Prague, she was offered an engagement there. Since the season 1992/1993 she has sung the leading parts in operas of both national and world repertoir on the stage of the National Theatre. Besides Marenka she was Jitka in Dalibor, Vendulka in The Kiss, Ludise in The Brandenburgers in Bohemia, Hedvika in The Devil´s Wall, Anezka in The Two Widows , all those operas by Bedrich Smetana; in the operas by Antonin Dvorak she sang Rusalka in the opera of the same name, Julie in Jakobin; in the works by Leos Janacek it was Jenufa (in Jenufa) and The Fox in The Cunning Little Vixen, in The Fall of Arcun, an opera by Zdenek Fibich. Her great parts in the National Theatre (Prague) include Tatyana in Eugene Onegin by Tchaikovsky, La contessa in Mozart´s Le nozze di Figaro, Micaela in Bizet´s Carmen, Elizabeth in Wagner´s Tannhäuser and Elisabetta di Valois (Verdi – Don Carlo). Her most recent major roles include the main part in Libuse by Smetana.

On the other opera stages she played the part of Armida in Dvorak´s work of the same name, or Sister Paskalina in The Miracles of Mary by Martinu.

Dana Buresova participated with the National Theatre company in the tour round Japan several times (Rusalka, Die Zauberflöte, Le nozze di Figaro), and she was as well a guest as Elizabeth in Wagner´s Tannhäuser and Gretel in the opera Hänsel und Gretel by Humperdinck. She portrayed the leading part in Smetana´s The Bartered Bride in Baltimore, USA. She sang Jitka in Smetana´s Dalibor in Sardinia and Rusalka in Las Palmas. Conducted by Jiri Belohlavek in London, she also sang in a concert production of two operas by Bedrich Smetana: in the part of Marenka in The Bartered Bride (2012), and Milada in Dalibor (2015). In the year 2012 she performed with the same orchestra and conductor in London at a concert presentation of The Jakobin by Antonin Dvorak.

Besides her opera activities Dana Buresova is developing her concert activities successfully and she is also successful in recording operas and songs. In 2012, the Harmonia Mundi publisher released a CD with a concert performance recording of Smetana’s The Bartered Bride (conductor Jiri Belohlavek). She also worked with other outstanding conductors, e.g. Oliver Dohnanyi, Jiri Kout, John Fiore etc.

From earlier concerts and recordings there are for example the cooperation with the ensemble Musica Antiqua (concerts in Germany, Denmark, France, Austria and other European countries, two CDs with baroque and Czech folk music). She also recorded Smetana´s Evening Songs with The Prague Chamber Orchestra. For Supraphon publishers she recorded a CD with songs by Vitezslava Kapralova. She sang the soprano part in Zemlinsky´s Lyrical Symphony conducted by Vladimir Ashkenazy at The Prague Spring Festival. She takes part as the 2nd Nymph in Rusalka in recording of the opera under the baton of Sir Charles Mackerras.

In 2008, Dana Buresova was awarded Thalia prize for extraordinary stage performance in part of Elizabeth in Wagners opera Tannhäuser. She received the annual award of the Internet portal Opera Plus in 2014 for the best opera performances in the season of 2013/2014.
For more information about Dana visit her website at http://www.danaburesova.eu