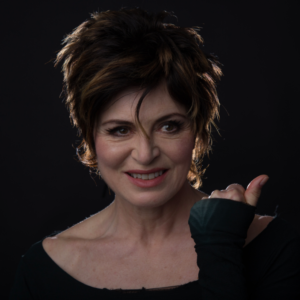 Now established as one of the finest sopranos of her generation, Anna Caterina Antonacci is an award-winning vocalist, winning multiple prestigious prizes including at The International Competition for Verdian Voices (1988), the Maria Callas Competition and the Pavarotti Competition all celebrating her cantilena, expression but above all, the voice itself.

From the brilliant Rossini of her early years, she moved to Rossini serio and operas including; Mose in Egitto, Semiramide, Elisabetta, Regina d’Inghilterra and Ermione. She then introduced Donizetti’s queens, Mozart’s Donna Elvira (Don Giovanni), Elettra (Idomeneo) and Vitellia (La Clemenza di Tito) into her repertoire. This was followed by Gluck’s Armide, staged by Pier Luigi Pizzi and directed by Riccardo Muti, which opened the 1996/97 season at La Scala; Alceste in Parma and Salzburg and Cherubini’s Medea in Toulouse and at Paris’ Theatre du Chatelet.

Anna Caterina’s triumph as Cassandra in the Chatelet’s 2003 production of Les Troyens with Sir John Eliot Gardiner, signaled a migration towards the great heroines of the French repertoire, following in Regine Crespin’s footsteps. Here, a tragedienne was born.

In La Juive and Carmen (respectively at Covent Garden under Pappano and at the Opera Comique under Gardiner), she revived a tradition of French singing in the spirit of Viardot, another great Rossinian. These accomplishments were followed by Handel’s Agrippina and Rodelinda. Her portrayal of two roles within L’incoronazione di Poppea, as Poppea (Munich) and Nero (Paris), inspired Era la notte; her one-woman show around Monteverdi’s Combattimento di Tancredi e Clorinda, which continues to tour.

Equally accomplished in the recital hall, Anna Caterina’s relationship with pianist Donald Sulzen has allowed her to increasingly focus on song, be it Italian (Tosti, Respighi) or French, notably Faure (L’horizon chimerique), Debussy or Reynaldo Hahn. 2013 was a landmark year, with the premiere of La Voix humaine and two noteworthy concerts; Faure’s Penelope and Reyer’s Sigurd. She began a wonderful year in 2014 with Carmen at Covent Garden opposite Roberto Alagna, conducted by Daniel Oren and continued with Les Troyens at La Scala, followed by her debut in Iphigenie en Tauride at the Grand Theatre de Genève. Anna Caterina had an opera commissioned for her by Marco Tutino, La Ciociara, which premiered at San Francisco Opera.

In recent years, Anna Caterina has collaborated with Les Siècles for La damnation de Faust, Ed Gardner and the RAI Torino Orchestra for La mort de Cleópatre, and has worked extensively with David McVicar in new productions of Gloriana (as Elizabeth I) at the Teatro Real Madrid, and Médée (title role) at Grand Théâtre de Genève, and returned to the role of Cassandre in McVicar’s epic Les Troyens at the Wiener Staatsoper.

Engagements this season and beyond include La Voix Humaine and Iphigénie en Tauride at the Enescu Festival and Teatro Petruzzelli in Bari, Oedipus Rex at the Concertgebouw, Elizabeth I in Gloriana at New York City Opera. She will continue to give recitals in major venues across the world with her pianist Donald Sulzen.